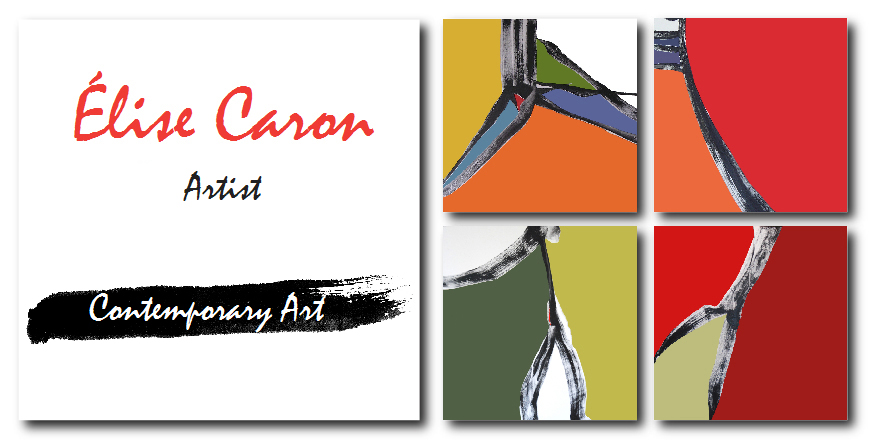 Élise Caron belongs to the school of Quebec painters who have focused on research to improve their art. Interested at a very young age in art was determining factor when she had to choose a program studies. She began studying Graphic Arts at Cégep St-Laurent and then studied Fine arts at Concordia University where she completed a Bachelor of Graphic Design with a major in illustration.

For a decade, Élise Caron worked as a Graphic designer for different advertising farmland also and taught graphic design, while she pursued her private interest in painting. She improved her technique in watercolour with Jean-Paul Ladouceur . She also practises Western calligraphy. Since 1983, Élise Caron has taken part in several group exhibits. In 1988, she organized her first solo exhibition.

In 1996, her artistic practice took a new direction as her interest grew in painting and Chinese calligraphy. She enrolled in the Department of East Asian studies at the University of Montreal in order to study the history of Chinese and Japanese art. She greatly improved her brush stroke through private workshops with master of Chinese calligraphy. She perfected her brush technique during her work in an individual workshop with a Chinese Master Calligrapher. Élise Caron was awarded a scholarship from the a scholarship from the Conseil de la culture des Laurentides which allowed her to enrol in individual coaching with a Chinese master of Tai-Chi, which helped her deepen her knowledge oh Chine philosophy. She won 3rd prize from the American Orchid Society for a Chinese painting entitled "Silence".

Élise Caron researched and hosted a series of six television series about calligraphy and Chinese painting entitled: "OMBRES ET LUMIÈRES AVEC ÉLISE CARON", which was aired on Canal Vox in autumn 1999 with a repeat broadcast in winter 2000-01. Élise Caron was a regular guest at the daily events devoted to painting in the gardens of Lieutenant Governor, Lise Thibault. She was also invited to provide paintings for the Mosaïcultures Internationales de Montréal during the August 2001 Week of Arts. In April 2002, she took part in the sale-exhibit "LES FEMMEUSES", a major art event in the new Montreal region. In 2003, her painting was chosen by the designers of the TCHFM (The Canadian Home Furnishings Market, held in Toronto) and was showcased during TENDANCES 2004-05. During the entire month of September 2004, the Browns organized solo exhibit in the windows of their Ste-Catherine street store. This was part of an initiative that contributed greatly to the Culture Days organized in Montreal.

Élise Caron is a member of RAAV / CARFAC, (group of professional artist in the visual arts). She continues to provide individual coaching to teach professional artist and upcoming young artists. She lectures on art and is part of a group of artists dedicated to the Integration Policy from Arts to Architecture, 1% . In April 2013, Élise Caron received a create of arts scholarship with $15,000. from the CALQ. (Conseil des arts et des Lettres du Québec).
Élise Caron's art was exhibited at the Marius-Barbeau Museum in the Beauce, for the entire summer of 2011.

In 2013, the Mont-Saint-Hilaire Museum of Fine Arts organized a prestigious exhibit on "Paul-Émile Borduas, the New York Years as well as the Heritage of Paul-Émile Borduas" in which she was invited to participate. At the same time, Caron's solo exhibit was organized in the Paul-Émile Borduas workshop at the Maison de Paul-Émile Borduas which is part of the Mont-Saint-Hilaire Museum of Fine Arts. Her exhibit was entitled "Pureté et dépouillement".
She was the 2015 finalist for the CALQ Award for Creator of the Year in the Laurentian (all disciplines included). This award is given in recognition of an individual artist for their entire opus and for the quality of his or her work.
Her works are included in private and public collections held, among others, by the governments of Quebec and Canada, particularly the Department of Foreign Affairs (for Canadian embassies).
Her works may be viewed at various solo or group exhibits in many well-known artistic and cultural centres in Montreal. Galleries in Canada and USA: Montréal, Baltimore, Philadelphia, Chevy Chase and Fort Lauderdale.

Publish the Menu module to "offcanvas" position. Here you can publish other modules as well.
Learn More.